“This novel is an arrow through the heart.”

“In the spring of 1916, 17-year-old Bogart “Bogey” Lambert rode out from his family’s ranch on a dappled gray stallion named Crazy Horse, headed to France to join the French Foreign Legion and fight against the Huns in the Great War.”

1920s Paris—les Années Folles, the crazy years: After recovering from grave wounds suffered in one of the deadliest conflicts in human history, Bogey makes his way to the City of Light, where he encounters the beautiful young painter, Chrysis Jungbluth. Precocious, passionate, talented, this free spirit rebels against a society and an art world in which men have all the privileges, and women none. By day, a serious student at the prestigious l’École des Beaux-arts, at night Chrysis loses herself to the sensual pleasures of the emancipated night life in Montparnasse. There, she and the young American cowboy will live the love of a lifetime.


to read the foreword to The Memory of Love click here> 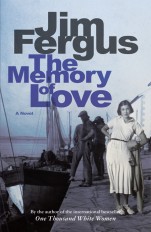 In a whirling and fluid writing style, Jim Fergus leads us into a world made of gravity and of lightness, of blood and of flesh…Captivating.
–Valerie Trierweiler, PARIS MATCH

A writer who knows how to speak about women and to women.
–Bernard Lehut, RADIO RTL